Sicily and its wonders between Art, Culture and Trekking
Discover our offers

Sicily and its wonders between Art, Culture and Trekking
Discover our offers

Sicily and its wonders between Art, Culture and Trekking

Starting from Catania, a city unique for its lava stone buildings and its lively nightlife, the journey winds through the unmissable stages of Sicily, allowing a real immersion in the treasures of the island. Syracuse, once the capital of Magna Graecia, was defined by Cicero as “the most beautiful of Greek cities” and the richness of its heritage has earned it inscription among the UNESCO World Heritage Sites. A visit to its Archaeological Park is a real plunge into antiquity, while strolling in Ortigia gives a sublime moment thanks to the beauty of its promenade, the fascinating Arethusa fountain and the dazzling white of the Cathedral square that reflects the light of a tireless sun here. Noto, the Baroque capital, owes its magnificence to the fact that it was the capital of the Val di Noto during the Kingdom of the two Sicilies. Showing greatness and stylistic abundance is the Cathedral and the same redundancy can be seen in the decorations of the noble palaces of the course and the surrounding streets. Modica is also called “stone garden” for the compactness of the countless baroque churches that inhabit the historic center, a maze of narrow streets that gives glimpses of postcard views. The Valley of the Temples of Agrigento is an unmissable stop on any trip to Sicily, where twelve Doric temples show themselves in all their beauty on a hill overlooking the coast.

Finally, Palermo, the regional capital, is par excellence the most representative city of the diversity of cultures that have followed one another in Sicily: here the Norman palaces coexist with the Arabic ones and traces of Arab culture are very present in the gastronomy. The Cathedral of Monreale is another of the wonders of Sicily, its mosaics literally take your breath away. The visit of Cefalù and Taormina is a relaxing moment in which you can appreciate the beauty of the seaside villages and observe the calm that characterizes them. Another stop certainly not to be missed is Mount Etna, which on this trip will be observed from the northern side, the richest in wooded vegetation and most fascinating for its variety of landscapes. The flows of the last destructive eruption are here clearly visible while the visit of a lava flow cave will give the feeling of being in the bowels of the volcano!
This trip is suitable for those who want to enjoy the architectural and scenic beauty of Sicily while enjoying the comfort of a small group and a companion available throughout the trip. 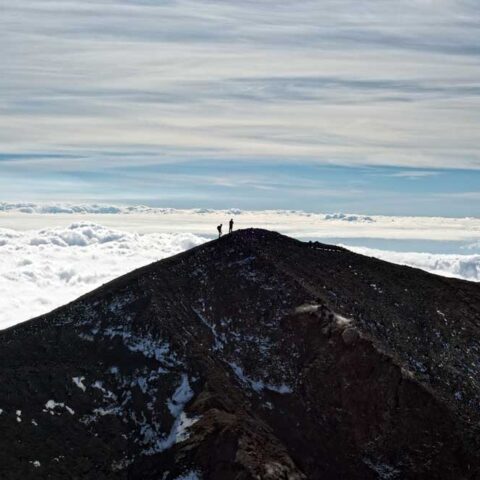 The price does not include:

Arrival at Catania airport, meeting with the guide.
Transfer to Syracuse and accommodation in hotel.
Dinner in a restaurant and overnight at the hotel.

Morning dedicated to the discovery of Syracuse accompanied by an authorized cultural guide: visit of the Archaeological Park with its Greek Theatre, the Ear of Dionysus, the Cappuccini’s latomie. Lunch in a restaurant. Afternoon free for a walk in the center of the island, the beautiful Ortigia.
Dinner in a restaurant and overnight stay in Syracuse.

Departure towards Noto, a city that after the earthquake of 1693, was completely rebuilt in Baroque style. The richness of its architecture has earned it the inclusion in the UNESCO World Heritage Site. Continuation with the visit of Modica, its cathedral of S. Giorgio and the church of S. Pietro. Do not hesitate to taste the famous chocolate of Modica!
Free lunch
Continuation to Agrigento, dinner and overnight at the hotel.

Free visit to the famous archaeological site of the Valley of the Temples, a UNESCO World Heritage Site, which includes numerous Doric temples and remains of the ancient Greek city of Akragas. Among them, the ruins of the immense temple of Olympic Zeus, the temple of Hercules or the temple of Concordia.
Picnic during the excursion
Departure for Palermo.
Accommodation in hotel, dinner in restaurant and overnight at the hotel.

Meals: breakfast – lunch (in the form of picnic) – dinner

Free visit to the city of Palermo, one of the architectural jewels of Southern Italy.
Through the lively streets of the historic centre, you will discover the monuments of the Arab-Norman era: the Church of San Giovanni degli Eremiti or the Palatine Chapel (Palazzo Reale).
Not to be missed is the old local market of Vucciria, a riot of colours and folklore.
Free lunch.
Dinner in a restaurant and overnight at the hotel.

After breakfast transfer to Monreale. Free visit to the Cathedral dedicated to the Virgin Mary, famous for its cloister and Byzantine mosaics. Continuation towards Cefalù, a well-known and charming seaside resort.
Free lunch
Transfer and overnight stay in Letojanni.

Meals: breakfast – lunch (in the form of picnic) – dinner

Departure towards Taormina, the “Pearl of the Mediterranean”. Possibility to visit the Greek theatre.
Departure towards Etna and lunch in a typical refuge.
Visit of the Grotta dei Ladroni, a lava tunnel of great interest.
Small walk on the Sartorius Mountains, ancient extinct craters that allow you to understand the morphology and nature of the volcano.
Transfer and overnight stay in Catania.
Free dinner.
End of the guide’s services

Departure by own means (taxi or bus) to Catania airport.